Thailand has progressed a great deal over the last 20 or so years and has now become a world class holiday destination that is accessible to more and more people. As tourism increased, this naturally meant that hotels needed to be developed that could cater for every budget from backpackers looking to stay in hostels to businessmen and even film stars. Thailand’s hotels needed to make a step up from what had previously been offered and match the standards offered in the western world.

If you go to any of the major tourist destinations such as Bangkok, Chiang Mai, Phuket or Pattaya you will find the major international hotels such as Hilton, Sheraton and Holiday Inn as well as a range of upmarket boutique hotels. Budget and mid range accommodation is available in all of these destinations so price doesn’t need to be a reason for not visiting these areas. Towns and cities that are less influenced by tourism or big business will certainly have hotels but they are probably a step down from international chains.

“Up Country” is a term that usually relates to any destination outside of the main tourist destinations, not necessarily in the north so the term can be misleading. Large cities such as Korat (Nakon Ratchasima) and Udon Thani have a number of high quality hotels including some well known chains. Cheaper hotels and guesthouses are available in these places too.

If you step outside of the large cities the accommodation can sometimes be of a more questionable nature especially is you are visiting some of the more rural locations. If you can find accommodation in these places it may be referred to as a ‘resort’ but expect to find crouch toilets and fan rather than air conditioned rooms. These types of hotels appeal to many people due to their almost rustic feel and sense of visiting the ‘real Thailand’ although this doesn’t necessarily apply to everyone.

As you would expect in any large capital city, Bangkok has everything in terms of hotels and prices to match. In the areas of central Bangkok like Sukhumvit and Silom you will find the well know international hotels as well as large Thai owned hotels. There are a number of luxury boutique hotels as well as cheaper and mid range hotels that can be easily be found in most areas of the city. The most popular hotels tend to be found centrally, close to either BTS or MRT stations or alternatively close to the river and Grand Palace.

Chiang Mai is a large sprawling city that is located in the north of Thailand. Most of the major hotels are located close to the central moat area and the River Ping. Many of the hotels are large international concerns as well as large Thai owned hotels. These tend to be slightly more expensive than you would expect. There are also a number of upmarket boutique hotels as well as many at the budget end. Chiang Mai is a popular destination for backpackers so much of the accommodation is designed to target this market.

Just outside of the city there are a number of luxury resorts located in the hills some of which are connected to local golf courses. Like many other places there are lots of Thai style resorts that predominantly aim at the Thai market.

Phuket is an island located in the south of the country like so many of the other possible destinations that we could have singled out. As you would expect in a major resort you will again find the international chains as well as large Thai owned hotels. Boutique hotels, serviced apartments and even condos are available for those perhaps looking to take more of a self catering break. Phuket, with its island status tends to be slightly more expensive, especially the beachfront hotels but this is what you would expect to find in most countries around the world.

Guesthouses, hostels and Thai style resorts can also be found on the island to cater for those visitors who are perhaps working to a tighter budget.

Pattaya is a well known tourist destination that is located around 2 hours from Bangkok. The resort is perhaps best known for its reputation as being a party town – something that dates back to the Vietnam War when US military personnel used to visit for R&R. The city, like the others mentioned in this list has all the major international chains, Thai owned hotels, boutique hotels, hostels and guesthouses. In a similar manner to Phuket, condos and service apartments are also available for rent.

Due to large supply of rooms that are available, it is often easy to pick up a bargain especially if you search online via one of the well known accommodation sites. Thai national holidays make Pattaya a popular destination with Thais travelling to the city from Bangkok and prices tend to be inflated at these times.

If you are a family travelling to Pattaya it may be worth doing some research prior to your stay to ensure that it is a family orientated hotel. 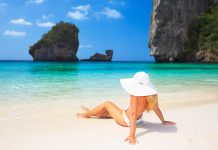 Best Thai Beach Hotels For People On A Budget